Sights and things to see in Sergiev Posad

Sergiev Posad is a tourist gem, an Orthodox center and the only city on the Golden Ring of Moscow region.

Sergiev Posad grew up more than 700 years ago around the Trinity Monastery, founded by Sergius of Radonezh, it has long played an important role in the formation of Russia. In the XV century the monastery was burnt to the ground by Tatars. After reconstruction it was surrounded by fortress walls with towers.

The vast majority of travelers come here just to visit Holy Trinity-St. Sergius Lavra, but we won’t be like the pilgrims, and take a walk through the old quarters in the center of the city, hoping to bust the myth that Sergiev Posad is a city of just one single tourist attraction.

The Pancake Hill is the best place in Sergiev Posad to enjoy the breathtaking view of the Trinity Sergius Lavra. However, it is interesting not only for its appearance, but also for its history. Formerly one could taste the famous all-Russian Trinity pancakes. Now it’s hard to find pancake houses in the area. 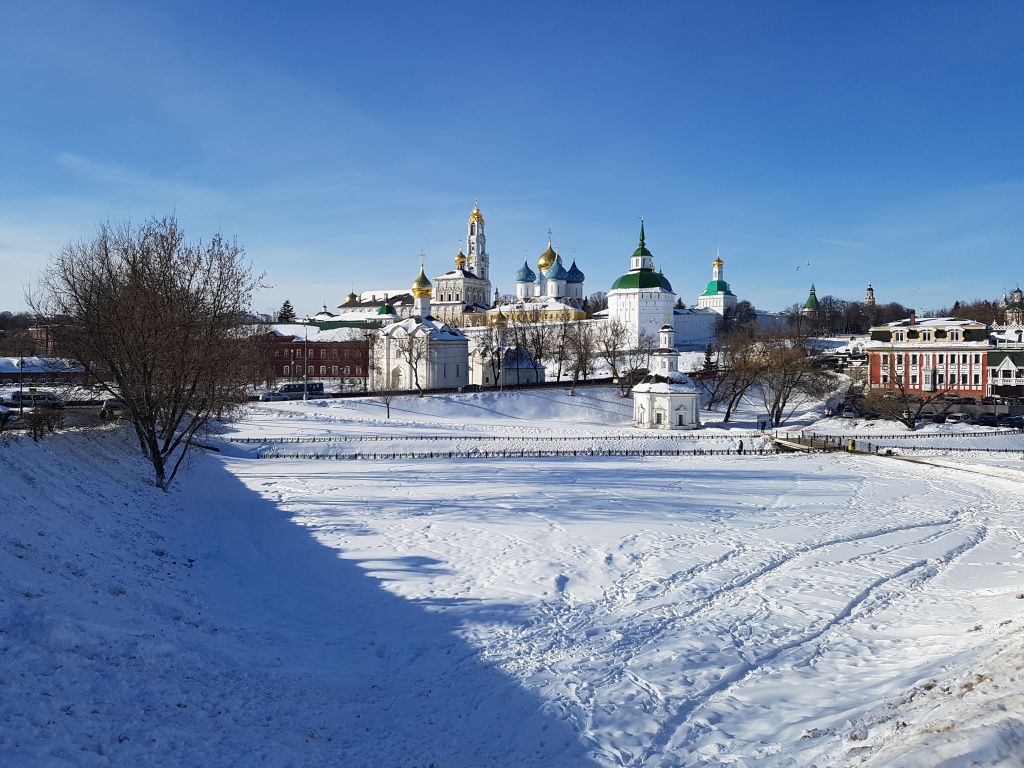 An interesting fact: the monks were forbidden to visit the “pancake” (the name of the Pancake Mountain), from which we can conclude that the pilgrims were also offered other viands and amusements, much less innocent, in addition to pancakes.

With the revolution Lavra fell into decline, and with it the Pancake Mountain. Its place was taken by a flea market, which existed till the 60s. Today the mountain is turned into an observation platform, the most popular place for photo sessions.

From here begins the urban adventure for those who choose to get to Sergiev Posad by train. By the way, the way from Moscow by electric train takes about an hour and a half. It takes just as much to get here by bus. Departures from VDNKh metro station. By car the trip will take you only an hour along Yaroslavskoye shosse.

From the building of the railway station begins the pedestrian tourist route “The Road to the Temple”, opened in 2019, connecting the most significant places in the historic center of the city: embankments, boulevards and neighborhoods of old buildings. One of the most interesting parts of the scenic route is the pedestrian zone, leading from Red Army Street to the church of Peter and Paul. Why in Sergiev Posad are there extra churches, you may ask, because there is the Lavra, and you would be right! But according to the Internet there are 75 active churches, can you imagine??

One of the most notable non-religious buildings in Sergiev Posad is, of course, the Toy Museum. Its founder, Nikolai Bartram, began his collection in the 10s of the last century. The museum was founded in 1918. The original toy exhibit was opened in Moscow, where it quickly became one of the most popular and fashionable museum centers, second in attendance only to the Tretyakov Gallery. 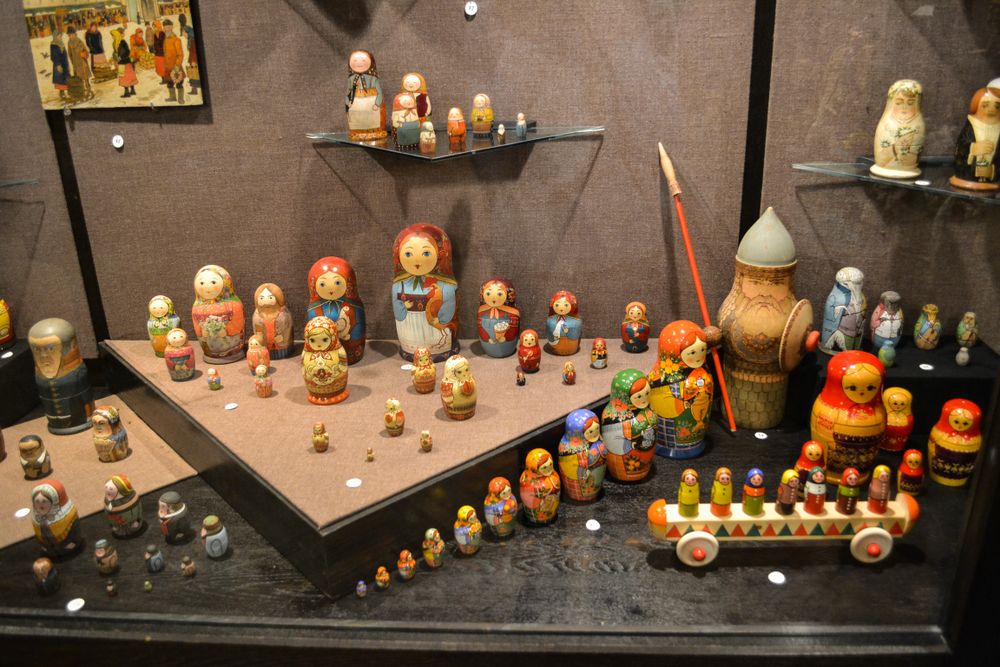 After Bartram’s death in 1931, the entire valuable collection was moved first to Zagorsk, and later to the old mansion of a former commercial school on the bank of the Kelarsky pond, where it is still housed today.

The museum has a unique collection of toys from all over the world, which were dear to the hearts of children for many generations. After the revolution, new names were given not only to the streets, but also to the reservoirs. Thus, the Kelarsky Pond near the Toy Museum was named “First Public”. However, new names were seldom used even by the authorities, and not many of them caught on.

The shortest and the most tourist street of Sergiev Posad starts literally in a hundred meters from the Lavra. Karl Marx street was called Alexandrovskaya Street before the revolution, and during its long and difficult history it has lost a number of important buildings and mansions. But most importantly, it managed to retain its unique coloring. Tsar Ivan the Terrible passed this street several times. Later a complex of buildings of the orphanage was built here that included an almshouse, a hospice, a hospital, and a school for orphans.

At the turning point for the street in 1930, in the brick buildings of the former House of Priesthood, the Rosa Luxemburg Knitting Factory was opened, which became one of the leading enterprises of the city at that time. Today all the most popular city cafes can be found on the street: Varenichnaya number nine, Landau and the place with the speaking name “Brynza.

The Equestrian Yard museum complex is situated in a picturesque place on the shore of the White pond. It was built in 1790. In the 17th century, the Trinity Monastery maintained a huge stable, serving many rich estates. Nowadays the restored buildings are used for exhibitions of the Sergiev Posad State Historical and Art Museum. These exhibits present the history of the region and the Trinity-St. Sergius Lavra, Russian folk art and modern decorative and applied art.

At the main entrance to the Lavra monks greet special guests. Over the centuries, on the territory of Sergius Lavra Holy Trinity Laura a unique ensemble of multi-temporal buildings has been formed, which includes more than 50 different structures. The Lavra itself is Orthodox shrine number 1, founded by St. Sergius of Radonezh in 1337. By designation, it is a monastery for men. 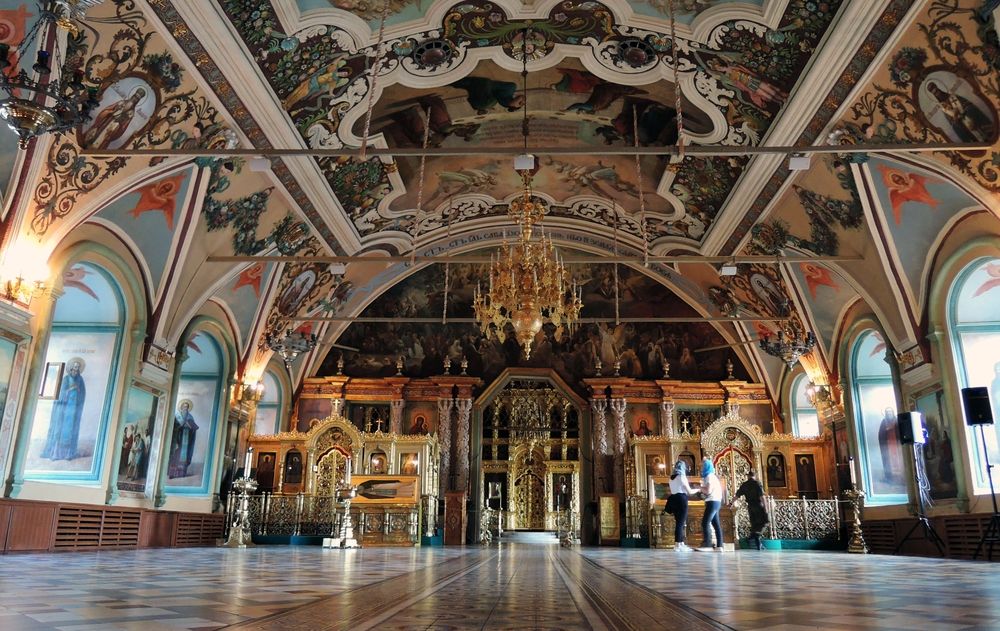 The most ancient stone temple of the local architectural ensemble is the Trinity Cathedral, built by Nikon Radonezhsky on the ashes of the. Nikon is a follower and disciple of Sergius of Radonezh, and the temple itself is interesting because it was painted by Andrei Rublev’s artel, and it was here that the famous Trinity icon was painted, which is now in the Tretyakov Gallery. There is always a queue of pilgrims and believers waiting to touch the relics of Sergius of Radonezh. They are said to have a life-giving force, but everyone finds something special here.

Bell tower of Trinity Sergius Lavra built in late 18th century. In the past there were 42 bells ringing all around from 88.5 meters high, including a 67-tonne giant, but in the 1930s most of the bells were smashed as part of the anti-bell campaign. Later, the bell tower was restored, but only 26 bells were returned to the bell tower. 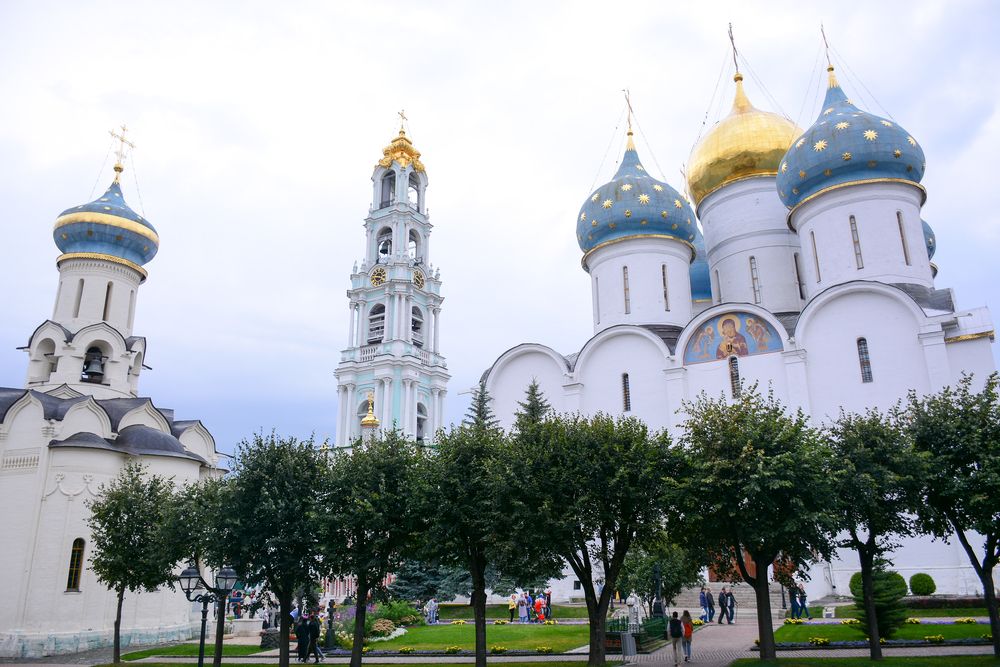 View of the Cathedral Complex from the street

The Cathedral of the Assumption was founded in 1559, by order of Tsar Ivan the Fourth the Terrible. The tsar and his family were present at the foundation stone of the church, which was consecrated in 1585 after the tsar’s death. The entire cathedral is painted with amazing frescoes by Yaroslavl and Troitsk masters of the 17th century.

The building of the tsar’s apartments, formerly the traveling palace of Czar Alexei Mikhailovich, stands out of the general architectural style of the Lavra. They are home to the church-archaeological museum, where precious utensils, ancient books and vestments are on display.